A capacitor is an energy storing device. It is a medium by which energy is stored to either be released suddenly or over a period of time. The energy or capacitance of an electric capacitor is measured in the form of micro-farads. Essentially, two plates are separated by a material known as a dielectric or insulator. These insulators can be mica, ceramic, porcelain, Mylar, Teflon, glass, or rubber. Capacitors will also limit the current. They can be used to store voltage or build it up until the call for it to be released is present. 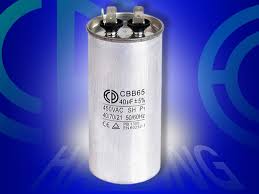 We install many Capacitors every year and are a great source for all your air conditioning needs in Birmingham, Alabama.  If you would like a DIY solution, get the rating numbers off your capacitor and check out Amazon units that are made in America.
You may need a temporary solution to the extreme temperatures in your home, Click here for window AC units for a worst-case scenario

Before spending time or money on an HVAC repair, learn the 9 actions you can take yourself when your AC or furnace stops working.

Get Our FREE e-Guide
$30 OFF Service Call or Tune-up SAVE NOW!
<section id="cu